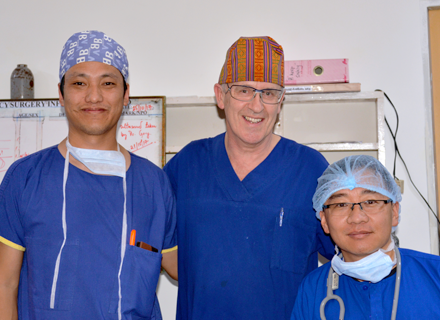 Dr Mark Moore has previously served as the state chairman of training in Plastic and Reconstructive surgery for the Royal Australasian College of Surgeons (RACS).

A significant part of the role of consultant craniofacial surgeon in the Cleft and Craniofacial SA (C&CSA) has been to supervise and mentor the visiting Craniofacial Fellows – these have come from many nations within our region, as well as further afield. Among the former trainees are surgeons who have gone on to head craniofacial units in Indonesia, Thailand and Oman, whilst many other continue to utilise the skills gained here more generally in their plastic surgical practice.

Whilst traveling and working overseas teaching/training in the field of craniofacial deformity began for Mark on Cleft and Craniofacial SA (C&CSA) teams to Hong Kong and Malaysia, with later involvement in Indonesia and Oman.

From 1999, as part of OSSAA teams to Timor Leste (East Timor) and Eastern Indonesia it has been possible to teach cleft and reconstructive surgical principles – this has seen the training of the first surgeon with plastic surgical expertise in East Timor – Dr Joao Ximenes , who now performs cleft lip repairs in his own country. In Indonesia a number of the local trainees who accompanied our Overseas Specialist Surgical Association of Australia (OSSAA) teams now occupy senior consultant roles in Jakarta, Surabaya and Bali.

More recently Mark has, under the banner of Interplast Australia and New Zealand, been involved in teaching cleft and general plastic surgical principles to junior and senior surgeons in Bhutan and Papua New Guinea (PNG). This will continue as Interplast seeks to establish independent plastic surgical services in both those nations.

Mark's extensive teaching and training experience throughout the world includes: